It has been quite a while since I have written a newsletter, but just recently the Lord spoke to me and I felt that I could wait no longer. I would like to share some thoughts the Lord has recently impressed upon my heart, as well as give you an update on the ministry.

As many of you know, I have had some downtime this summer recovering from a scheduled surgery which has given me the opportunity to attend several church services as an attendee rather than as the minister. It has been very refreshing and I’ve truly been blessed. As I was sitting in one of the services, I heard several people describe their desire to see God move in a new and fresh way.  Their words were, “I am ready to see God do ‘this’ or ‘that’. I am ready to see ‘certain things’ happen. I am ready…” Suddenly, I heard the Lord speak to me. “People say they are ready, but are they prepared?” It was so loud and clear in my spirit that I was startled.

Ready, but not prepared. Immediately my mind went to the ten virgins in Matthew 25:1-13. This parable is about a Jewish wedding and the bridesmaids who were chosen to light the way for the bridegroom to find his bride. There are some truths about the young virgins that stand out in this parable that need to be recognized:

As the parable continues, the lamps of the bridesmaids did go out while the bridegroom delayed his arrival. And actually, all ten bridesmaids fell asleep while they were waiting. But when the cry came at midnight, “Behold the bridegroom!”, all ten girls jumped up to meet the groom. It was then that they realized their lamps had gone out. The five wise virgins put their extra oil in the lamps, but the five foolish virgins had run out. They tried to borrow oil from the others, but to no avail. As they ran frantically to purchase some oil, the bridegroom came. Only those that were prepared went in with the bridegroom to the great marriage feast and the door was shut, allowing no one else to enter. This was their purpose, they had looked for His coming; therefore, they were prepared. When the five foolish virgins returned, they begged for a chance to enter the wedding, but were rejected.

My understanding is that the oil represents the presence of God or the presence of the Holy Spirit in our lives. Zechariah, the prophet, was shown a vision of a great golden lampstand with two olive trees standing beside it. The trees dripped oil into the bowls of the lampstand, and Zechariah was told: “Not by might, nor by power, but by my Spirit, says the LORD of hosts” (Zechariah 4:6). The oil symbolized the Spirit of God which keeps us established with the Lord, especially in the “dark” or “midnight” times of our lives, and gives us the power to maintain our testimony even in those difficult times. In the natural, when olive oil is produced, the olive must be pressed to produce the oil. The pressing of the olive represents us going into the throne room of our Lord…spending time with Him. That is what produces the anointing oil (presence of the Holy Spirit) that keeps our lamps burning! It is the substantial presence of God in our life that will keep the fire burning through the dark nights.

Obviously, it was the lack of an adequate supply of oil which caused these foolish virgins to be met with the words, “I do not know you” and the rejection of not being allowed to enter into the marriage feast. They did, of course, have some oil when they began, but it was not enough. The danger is that many people want enough oil to give them immediate help with their problems, or relief from their fear, guilt or shame, but they never go on to total surrender to the Lord. Those that were foolish took their lamps of an outward profession only. Many will go to church, pray, sing on the praise team, give in offerings, but they have no living, ongoing faith in their hearts. Even if we sell everything we have to feed the hungry and clothe the poor, if we do not have an ongoing relationship with Jesus Christ, all the good works we do will profit us nothing! It is one thing to profess faith in Christ, but it is altogether another matter to be bearing the fruit of the Spirit, revealing that they are truly abiding in the vine (John 15). These foolish virgins represent those who have the appearance of being ready, but who will be found unprepared.

But the wise virgins had found that deeper level. They had an extra reservoir of oil which continually fueled their spiritual life, never letting it falter or go out. It carried them in every hour of stress, of adversity, of disaster, keeping them firm and steady in the midst of the pounding pressures of life. They had a supply of oil that kept their light shining bright despite the circumstances.

How graphic and shocking this picture of one almost saved—but lost! And as alarming as it is, the difference between the wise and foolish only became apparent when the bridegroom arrived. Prior to that, all ten looked exactly alike! What a sobering thought! Even as I write these words, there is something deep inside of me that cries out to the Lord, “Please don’t let me be unprepared!” That may seem like an odd thing for a minister to say, but may I remind you that all the virgins considered themselves “ready”, but only five were prepared to meet the bridegroom.

Today, I challenge you as well, to soberly and honestly evaluate yourself. As of yet, I haven’t met one who classifies themselves with the foolish virgins. But from the parable, it is obvious there are those in the church who say they are ready but have nothing past the outward appearance in preparedness to meet the Lord. There are millions who are in the church, but not in Christ. But that doesn’t have to be you. Prepare yourself today to meet our Lord with your lamp shining bright!

ON A PERSONAL NOTE: 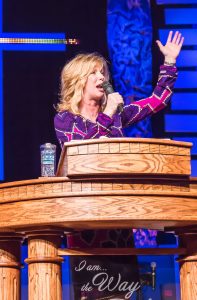 Don’t you feel a fresh stirring of the Spirit? I certainly do and we are seeing the manifestations of that stirring in so many of the services in which we have the opportunity to be a part. Many times when things are stirring and shaking in the natural as we have seen recently, it is indicative of what is happening in the Spirit. I truly believe the Lord is giving His church, as well as the entire world, the opportunity to get prepared for His soon return. With that being said, we are taking advantage of every occasion possible to lead people to the Savior. Whether it is through the spoken Word, worship, miracles, signs and wonders, we are always diligent to point people to Jesus, the Author and Finisher of our faith!!

2017 marks the seventh year of being back in full-time evangelism. Yes, there are times when Hampton Inn feels more like home than our own house, but the Lord gives us grace and strength to continue to follow His plan…and actually, there continues to be an excitement and an expectation for each open door! We are believing for new doors of ministry to open each year and the Lord has yet to disappoint us!

This year on June 29, 2017, Curt and I celebrated our 4th wedding anniversary! I know, it is hard to believe! 🙂 Every year it becomes increasingly apparent that our ministries are blending together more and more. It has been so exciting to see God work through us as a couple. We are grateful that we get to minister together most of the time, but there are still times that Curt is traveling in one direction and me in another. Either way, we are extremely grateful to be used of the Lord however He sees fit.

And lastly, please be in prayer with us for several things:
To be more effective than ever as laborers in His Kingdom
To be open to be used in ways that may be “out of the box” to accomplish His plan for our lives
For doors to continue to open for us across the nation
For finances to continue to come in to supply “more than enough” in meeting our personal needs and those of His Kingdom
Thank you for partnering with us! God bless you and we look forward to seeing you soon when we minister in your area!

PS: We are planning to have new CD’s and shirts available at the beginning of 2018!